I’ve hiked in seven different countries and explored some interesting terrain, but nothing comes close to hiking in the Southern Alps of New Zealand. While there are many beautiful hikes offered in the United States, Northern Canada, Africa, Southern Europe and South America, in my opinion, none of them compare to the Routeburn Track in New Zealand.

The Routeburn Track is a 2-4 day trek with most people taking closer to 4 days to finish. This isn’t because hikers in the area are slow; it’s because the beauty is so magnificent that people stop to enjoy it. It’s not like hiking the Appalachian Trail where you’re constantly looking to see if there’s something around the next corner. The Routeburn Track offers crystal clear lakes, vertical and cascading waterfalls down the sides of mountains, enormous lakes and more. 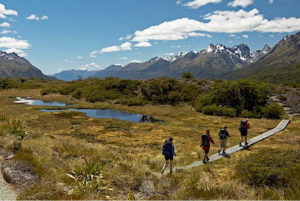 I stayed in Queensland prior to my adventure and made my way from there to the Routeburn Shelter. The drive was breathtaking. I saw everything from sheep-filled farms to snow-capped mountains to small huts by the side of the road. Once I arrived at the Routeburn shelter, the first thing I did was make sure I had enough water. I wanted to make sure hydration wouldn’t become an issue despite the chilly temperatures. After that, I checked the map, talked to a few hikers who had just completed their journeys and headed into the wilderness.

The waterfalls, lakes and rivers were all astounding. It was the cleanest natural beauty I had ever experienced. Since I had hiking sandals with me, I chose to cross the river at one of its shallowest sections – as opposed to using the bridge. The water was freezing, but I actually enjoyed it because it made me feel so alive. That said, at all other river crossings, I used the bridges, which were all sturdy despite the amount of gear I was carrying.

The entire hike was fascinating, but two moments were more memorable than all the others. One was crossing one of the bridges as it was being dowsed with water from a waterfall. The waterfall was overflowing due to a recent heavy rain. I hesitated for a moment and then shot across the bridge. I got totally soaked, but it was so invigorating. The other memorable moment I had was standing at the Peak of Conical Mountain, where I was able to enjoy 360-degree views of the lakes, rivers and lush vegetation in the valley below.

This post was written by Greg Peterson, an avid hiker from Colorado and one of SOURCE’s regular bloggers.