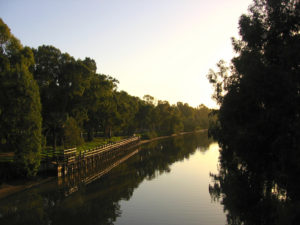 The recent indifferent weather here in Israel has been making extended cycling and hiking trips a real pain to execute. As someone that grew up loving the outdoors in the less exotic climes of the UK, I’m not adverse to some bad weather. However, the recent torrential downpours are good for the country but not so great for doing a bit of off road biking or hiking. A planned weekend trip to hike the National Trail in Ein Gedi next to the Dead Sea turned into a day’s cycling trip along the Yarkon River in Central Israel, due to the gloomy weather report.

Everyday, on my way to and from work, I cycle over the Yarkon River but I had yet to cycle the entire river along its cycling path which stretches 28 kilometers from its source. The springs begin just north of Petach Tikva and flow out to the Mediterranean from North Tel Aviv. It’s Israel’s largest coastal river and has a well kept and varied trail which follows the river its entire course. We were able to bike ride along this path even on a day where the sun was doing its best to peak out from the rain clouds looming ominously above.

We set out mid-morning from the bustling port of Tel Aviv, bustling not with boats, but with shoppers and families enjoying the many shops and cafeterias that have replaced the old storage warehouses. It is possible to cycle all the beachfront of Tel Aviv right up to the old city of Yaffo, along a promenade hugging the shoreline which can be a great place to watch the sun setting over the Med. Instead, with the sea to our backs, we headed East and it wasn’t long before we cycled into the Yarkon National Park.

The park itself is very green with lots of places to picnic, watch the rowers and generally lounge around in the sun. Even with the threat of rain, the park was busy and the cycle and pedestrian paths were anything but empty. There were plenty of water fountains dotted along the park, though we didn’t need them since we were well stocked with 1.5 litre hydration packs (Source of course). The trail passed through long green lawns with the occasional botanical garden, boating lake, zoo and climbing wall to distract you. The river is at it its widest here, but it isn’t long before it narrows and the park makes way for eucalyptus lined banks and old olive groves, really providing a great sense of calm. The paths became clearer, but it wasn’t long until we hit the industrialized area of Ramat Gan. To be fair, the Israeli Parks Authority have done well to maintain the banks of the river, as even when we passed the national stadium there was still greenery on either side of the river. Also, due to recent efforts to improve the once very high pollution levels, there are plenty of wild fowl to be seen. 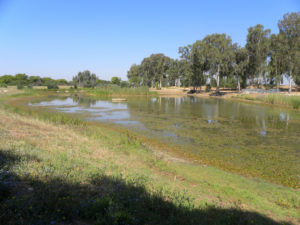 We continued along a trail that is actually part of the 600k Israel National Trail, stretching from the Golan to the Negev, and as soon as you pass the office blocks of Ramat HaHayal, you hit open countryside and say goodbye to nice asphalt paths and merge onto a trail that is in parts mud, in parts sand and in parts rock. It was hard to believe we were just 15 kilometers from bustling Tel Aviv as we could now only see lush reed beds to our right and fields of ripe pomelos, oranges and clementines filling the air with a sweet citrus smell. The cycle path definitely became much more interesting and each turn of the path presented a new challenge; thick puddle laden mud and fine sand not out of place in a desert, kept us on our toes. We stopped for a quick bite to eat by a small picturesque ford in the river, hoping to catch sight of a Kingfisher or two. Enjoying a brief sunny interlude we dipped our feet into the Yarkon waters and set off for the last 7 kilometers of the journey to the Yarkon’s source, hoping to enjoy a further foot paddle in the many springs which feed the river.

We got another 3 kilometers east before the heavens opened up and we were caught in a blistering thunderstorm. The path became increasingly like an impenetrable mud bath and impossible to cycle and so, with drenched clothes and disappointed hearts, we headed back towards the asphalts paths and home We had to carry the bikes for a good kilometer, stopping only to fill our backpacks with pomelos for tomorrows breakfast. Overall, it was a good, enjoyable and relatively easy cycle, not entirely ruined by the weather. With plenty to see and do this is something we will definitely do again once rainy seasons ends… which I hope is darn soon!

About the Author: Ben is an outdoors enthusiast with a passion for all things hiking, cycling, and rafting. Join him as he takes us along on his trips to the various hiking paths and bike trails of Israel. Make sure to check out Ben’s previous post about cycling the Galilee.