About the Yukon River Quest 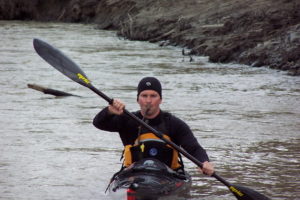 I have been busy training to compete in the 2011 Yukon River Quest – The Worlds Longest Canoe and Kayak Marathon (744 km), June 29- July 3rd, 2011 and have entered the Solo Kayak category.  I am registered as team #32 ‘Natural Momentum’ www.yukonriverquest.com. The YRQ is widely recognized as one of the toughest ultra marathon paddling events on the planet.  It starts in Whitehorse Yukon and ends in the lively Dawson City. I will be competing against close to 100 other teams from around the world. This international race has been featured in numerous outdoor adventure magazines and on NBC’s Jeep World of Adventure Sports (2009).

Why am I doing this?

I have asked myself this question every day since I decided to enter the race. I am sure I will be asking myself this question many times during the race. For me, taking on this challenge is personal. I find that at this point in my life I am looking for something to challenge me physically and emotionally. Not that marriage and kids don’t already provide me with this challenge. I have always had an affinity to water and the outdoors. The thought of being in the middle of the northern wilderness on the Yukon River competing is this legendary race is exciting.

Why did I decide on doing this particular race?

I guess I couldn’t have started off with a race with a few less kms attached to it, but that tends to not be the way my mind works…or doesn’t work 😉

I had heard about the race through a family friend who has paddled this race 10 times as part of the ‘Paddlers Abreast’ Voyageur canoe team. These amazing women are an inspiring team of ladies that are all survivors of Breast Cancer. The race sounding interesting, so I decided to watch the documentary that was produced about the ‘Paddlers Abreast’ team, titled River of Life.  After watching the 53 minute long documentary I decided that I would give this challenge a try.

What are my goals?

What are the Challenges of the Yukon River Quest?

There are many challenges that I am going to face in the Yukon River Quest. For starters the distance I must travel and remoteness of the area that I am travelling. The race itself follows the historic route of the Klondike Gold Rush of 1897-98.  On the race rules page it mentions: Teams should anticipate that they may spend many hours at a time out of sight of any other boat or living person. The Yukon River has very few road access points, and very few people live along its banks.

Some of the biggest challenges that I will probably will face are physical and emotional exhaustion, dehydration, hypothermia, injury and giant man eating mosquito’s. Also…to my excitement… the entry form that I signed in blood also had this lovely disclaimer… This long distance race takes you through very rugged and isolated territory where roads and people don’t exist, and where dangers, including death or injury from hypothermia, drowning, bear mauling, forest fire or other acts of nature, do exist.

Past racers have also experienced moose attacks and very commonly suffer from intense hallucinations during the 744km paddle.

I look forward to all these challenges and adding my name to the small list of people around the world that have taken on this challenging adventure and finished.

Water Training started during the middle of April, once the ice started moving off the Yukon River. My first few training sessions were 15 Kilometres long and focused on just being comfortable on the water again. Once I got my water wings back I spent the rest of April and beginning of May determined to improve my paddling technique with an Epic Carbon Fibre Mid Wing paddle. These sessions were 20-30 kilometres and also gave me the opportunity to test out the gear that I would be using during the race.  The next few weeks will be focused solely on increasing my mileage on the water and continuing to build up my endurance for the long haul. These sessions vary in length from 50-100 kilometres at a time. 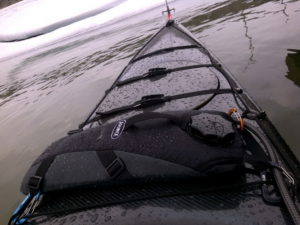 Staying hydrated is one of the most important aspects of this race. Doing this while competing in a paddling race presents challenges. The best solution for delivering steady fluids to your system while continuing to paddle is by using a hands free hydration system. After doing a great deal of research on various hydration bladders, I concluded that the 3L Source Wrap Tank would be perfect. The Wrap Tank provides a heavy duty outer cover that includes many tie down points.  The Source Storm valve allows for an extremely high flow rate.

Ever since I started my water training the Source Wrap Tank has been along for the ride.

There are many benefits in this particular race to using the Source quick connect system. The race begins ‘LeMans’ style with a 300 meter run to our boats at the edge of the river. Racers jump into their boats and quickly fight for positioning on the river. The quick connect allows me to easily connect my water supply without fumbling with clips or trying to feed the tubing through my life jacket. The system also works well in the event I need to self rescue if I end up flipping over in my kayak. I can quickly disconnect and not fear becoming entangled in my hydration tubing. Other benefits to this connection include exiting to access shoreline or to refill the bladder while paddling.

The Source Storm valve provides a fantastic flow rate which is advantageous considering that the custom tubing is 164 cm long. It also works well despite the river water that I have been refilling the tank with which contains many particulates.

Other Findings. Even though the wraptank is exposed to the sun while sitting on the back deck of my kayak, the insulated sleeve has helped to keep fluids at a cool temperature. The sleeve is also easy to clean after being covered in mud from the shores of the Yukon River.  So far the bladder has not developed any sort of mold or residue even after being used with many different types of fluids. 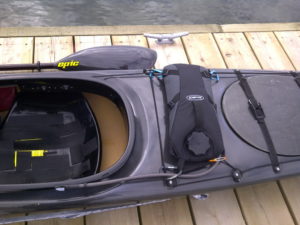 only small criticism that I have so far, is that the Wrap Tanks covering absorbs water from the rain or water coming off my paddle and becomes heavy. I may try positioning the tank inside my cockpit underneath my spray skirt. A recommendation to Source would be to consider a more advanced waterproof outer shell perhaps using a Gortex material. One other small challenge I had to deal with was at one point I lost the little rubber ‘O’-Ring that seals the quick connect. Some how it must have pulled off. To fix this, I purchased a few rubber ‘O’-Rings from a hardware store to replace the missing seal. I also coated it with a thin layer of silicone and have not had any problems since.

Final thoughts based on use of the Source Wraptank thus far. I think that the Source Wraptank is extremely versatile and should be the hydration system of choice for paddling sports. Not only does it meet the functional requirements, it looks great on the back of my black carbon fibre kayak.

I look forward to continuing to using the Source Wraptank and bringing it along for the ride during the 744 kilometres of the Yukon River Quest.