“It’s raining,” shouted the little boy as he burst out onto the street. “Wow, look at those puddles!” He wasn’t the only one to be caught off guard by the sudden rainstorm that knocked over trees and power lines during its four minute downpour. It isn’t supposed to rain in September in Israel. Winter usually doesn’t begin till late October, sometime well into November. The weathermen predicted the shower, but who ever believes the local weatherman anyway?

As the little boy stood and stared, another youngster didn’t think twice and to the shock of his mother who stood nearby, he boldly entered the large puddle, sandals and all. Back and forth the boy ran gleefully, delighting in his sense of freedom, while the group of grownups nearby inwardly wished they could do the same.

No, no need to bring out the boots just yet. Within hours, the rain clouds had moved on to another part of the country and the only thing remaining was the cool fresh air. Apparently that’s the way it is in Israel. No matter how much everyone expects the rains to come, they always seem to surprise everyone and catch them off-guard. Unlike the UK, where I hail from, where rain is seen as the default forecast every day of the year.

The rainy season in Israel begins around November and runs through to March. As a general rule, there is never any rain in the summer months so when the rain does arrive, it bursts forth with a vengeance, sending Israelis scampering around their gardens and balconies trying to hastily gather all the outdoor equipment and shove it indoors. Into the storage shed go the children’s toys —swing, slide, swimming pool, and any other junk that was collected over the summer. Goodbye bicycle, see you in the summer. The chairs are stacked and stored and the green grass stands naked before the heavens, as if impatient for a drink.

Israelis are outdoor people. Even in the winter they love to don their trekking boots, hoist on their hydration backpacks and travel around the country. The 5-10 degree Centigrade temperatures don’t seem to put a damper on their enthusiasm and slogging through mud and wet brush is just another adventure for the true Israeli sportsman. As an indication of their fervor and optimism, the city of Tiberias even hosts its 20k marathon in January, a notably rainy month.

Rain is a precious commodity in this country. So much so that when it does come, it is considered a blessing. It’s interesting to note that the raindrops in Israel seem to be heavier than in other places in the world. I don’t know if this is a proven scientific fact but the raindrops in Israel are huge! And just a note for those wishing to use an umbrella, forget about it. While umbrellas are a standard accessory in the UK, they don’t seem to be at-all effective in the rainy Israeli weather. One strong blast and wham, your umbrella is inside out, or has flown out of your hands! 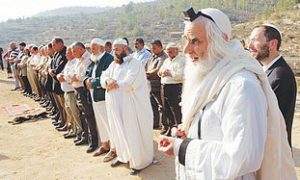 Several months into the winter, if the rain is in short supply, Israelis try to take things into their own hands. While Israel is a high-tech country and is always on the up and up of the latest scientific innovation, it appears that the most triumphant method for bringing down the waters is the good ol’ fashioned rain dance. When all things fail, a group of Jews take to the hills and, swaying rhythmically back and forth, cry out forcefully and implore the skies to open up and release their bounty. Well, I’ve heard of all kinds of strange things, but if they work, who am I to argue?

This post was written by Sarah Greenspan. She lives in the UK and visited Israel in September of this year.