Christian ‘Chrigel’ Maurer set a new record, flying and hiking from Salzburg to Monaco in an extraordinary 6 days 23 hours and 40 minutes to win the 2013 Red Bull X-Alps.

Christian ‘Chrigel’ Maurer started as one of three X-Alps competitors equipped with SOURCE Hydration Systems (by our Swiss distributor Sportimport Jäggi). He was obviously the man to beat in this race, having won the last two editions of the race in 2009 and 2011.

He knows how to fly…

While all 32 X-Alps contestants have wings to race 1,000 km across the Alps from Salzburg to Monaco, it seems only one of them really knows how to fly. Chrigel Maurer aka ‘The Eagle’ covered the distance days ahead of his opponents, getting to Monaco in a record-breaking time – even though on the map it was the longest X-Alps race ever.

“It’s the most amazing achievement,” says race mastermind Hannes Arch. “To finish in seven days is something I would never have expected. He’s just the most amazing athlete in the world. He makes no mistakes – that’s his secret.”

While Maurer celebrated his victory in Monaco, the fight for 2nd place continued. And it proved to be a gripping battle – Latour, Jon Chambers and Antoine Girard were jockeying for this position for the last 500km and very little separated them. Eventually the two French teams made it to Monaco in second and third place, before Jon Chambers landed on Tuesday. The close finish of these three teams only proves, how exceptional Chirgel Maurers achievement is.

The other two SOURCE sponsored athletes were not as lucky as Chrigel Maurer in their race. Lars Budack is still fighting to eventually get to Monaco in time before the race closes on Friday. An achievement which most athletes starting in the race set as their first goal. 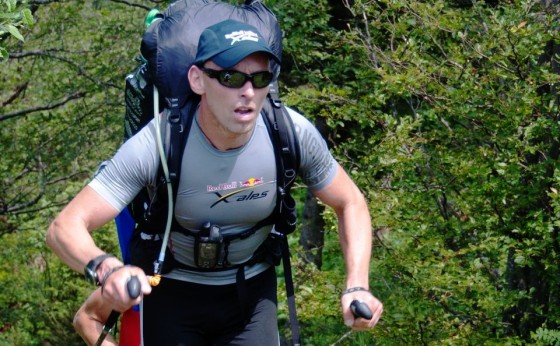 Not all of them will make it to Monaco

SOURCE sponsored athlete Thomas Hofbauer was sentenced to take a 48 hour break early on in the race for violating a closed airspace. That turned out to be the premature end of his competition, since every two days the last contestant in the field is eliminated.

No question about it: It has been a gripping race, amazing to watch, following it on Red Bull’s live-tracking page, in the daily video-clips and beautiful photos. From all of us at SOURCE: Congratulations to all the teams out there. And we’re looking forward to the next X-Alps in 2015!