“You’re all off your face, or you should be”, argues SOURCE Athlete Richard Bowles in the latest issue of Trail Run Mag. Find his rant below. For more trail running, go to Trail Run Mag online or connect on Facebook. 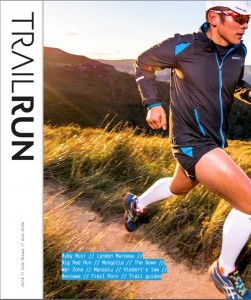 “Oh, you’re off Facebook for a moment? What – you’re actually out running? That would make  a change, because some of you  so called trail runners belong in mother’s meetings, sipping tea and swapping cupcake recipes, crapping on about your latest handbags and fad diets (without ever committing to them) all the while bitching about everybody else in the world.

Let’s talk about something important. Get off social media. Facebook and the like are,  for most of you, for promoting something you’re not bloody doing. Yep, bitching about, talking about, documenting about, crapping on about…I see so much of it, so often, that I suspect many of you aren’t actually running. Or you’re only running so you can nip back off the trail and boast about it to the social media mad world.

To me it’s the antithesis of what we love. There’s no dirty goodness (not the type I’m talking about anyway) to be found on a screen. I’m in this trail running game, I’m out there amongst it, the daily grind on the trails, loving the simplicity and rawness of the sport, and right now I’m on a mission of mercy to hold a mirror up to that which jeopardizes the nature of this sport. See that reflection? Yes, that’s ego and self-aggrandizing bullshit you’re looking at which might make you feel like a trail runner, but it doesn’t make you a trail runner.

Of course, you don’t have to keep reading my rant. Instead you could join a committee of backslappers, or start a trail running feed online, and get mucky stirring all manner of political shite amongst the chattering classes. Hell, maybe you can bitch about me…it’s been done before.

We seem to have lost the original heart of the trail running community and replaced it with a trail bitching community. Keeping tabs on trail running communities these days is like listening in on a teenage gossip session: “Oh my god, did you hear what such and such said about such and such? Yeah, I know, they’re only into trail running because it’s cool now. They’re not authentic. Like us. Wow, i looove your new heels – zero drop? The colour really suits all that scree running you talk about all the time…”

What’s happening to trail running in Australia, a sport grown organically by a community of people partly for the reason of leaving the ego driven world of track and road running behind. It has roots in running that fuels the spirit, brings people together with the sole purpose of just finishing something magical … together. And not always putting it up on a noticeboard of any social kind.

Everybody’s going head-to-head and it’s not just in the latest trail race, it’s on the web!

It’s time to log out of your profile and do what’s important: put shoes on and run. Prove what you say you are (or your Facebook feed claims you are).

We need to add a little something to this soiled running community and that’s a little (actually a lot of) running. Your shoes belong on your feet and in the bush, not at the doorstep.

Perhaps you think I’m out of order. I can sense some pent up angst as I type this. “But Rich uses social media, blah blah…” I don’t care … you know why? Because I was running at 4am while you slept; I was running on trails this afternoon while you were telling the social media world what you ate for breakfast, what tights you were going to buy for winter, and bitching about someone else not doing what they (and you) should be doing. I’m actually trail running, that’s why I don’t care.

If you can’t commit, then I don’t need to know about the chia muffins you baked, or your heart rate phase, while eating lunch.

You think Kilian eats up trails by bitching or telling the world about his latest seed diet from the depths of the amazon? A runner doesn’t  do that when they’re achieving the seemingly impossible. They are too busy achieving.

Still, not wound up enough to be convinced? After all, you’ve seen me on Facebook – double standard much? I certainly have my share of airtime, it’s 2013 and it’s how we communicate after all. It’s important to share the view from that mountain you just peaked, the echidna you hurdled on your night run, or the greatest of coffees and slab of cake you had on the way home. It’s motivating and inspiring to see others in action doing what we all love to do, sharing adventures as they unfold.

What I’m getting at is that statistics say that the average person spends between  7-11 hours per month across social media platforms. Another study showed that in 2011, Australians spent 14 minutes out of every hour online using social networks – and that was just on fixed line internet. Add to that all the time on your mobile device (phone, tablet etc.) – apparently another 12 hours a week according to a Telstra report in February. That screams to me whole days of trail adventures lost to the digital wilderness rather than the real thing.

Further, there’s more you can do than  just running the single track (or is there?) when you’re a ‘real’ (as opposed to cyber)  trail runner. Tell me you don’t have time to strengthen that core, stretch out that tight quad, swim, box, meditate or whatever else you feel makes you better at the true art of running it rough. Half your social media time and bang, you’ve found core training time. And if you are going to cook up those healthy snacks, I want to share them with you post run, there’s no flavor in a Facebook post.

Yes, we all want to share our achievements; but we need to achieve them first. And just like a good trail session, when you do post something online it’s all about quality over quantity. Make ‘em reek of inspiration (not boast-ification), and otherwise ask yourself: do you really need to be tapping out that post or should you be tap dancing down a trail instead?” 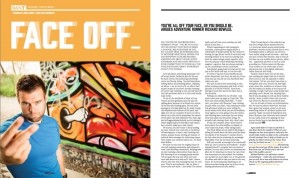 Agree with Rich? Or want to tell him to  step down from the soapbox? What are your thoughts on how much good or otherwise the social media realm can play in the community of trail running? Does it help or hinder you in getting out there? [And cue the irony]: have your say on the Trail Run Mag Facebook page www.facebook.com/trailrunmag. Alternatively, get out there and run off the steam. If we don’t hear from you, we’ll know you’re the real  deal. Chia muffin anyone?

Source Athlete Richard Bowles is an Adventure Runner extraordinaire – rather shy and retiring as you can tell, but a man who believes in action. Check out his ongoing global adventure runs at www.richardbowles.com.au.