He finished the Sahara Ultra Marathon and covered around 80 marathons in 66 days on the Apalachian Trail. After that it took him three years to fully recover and rebuild strength. Now Carlos is ready for the 1,000 km Israel National Trail – again.

“Every time I promise my family it’s the last one,” tells us Carlos Goldberg when we meet him days before he’s starting his next last one, the 1,000 km Israel National Trail. He already covered the trail north-to-south in 2007 and still holds the record of 12 days. This time he’s running home: From Eilat in the South to the end of the trail close to his family’s house at Israel’s northern border. He should make it right in time for his 60th birthday-party. By coincidence, the Israeli Society for the Protection of Nature, the organization responsible for the Israel National Trail, celebrates its 60th anniversary this year as well. Many good reasons to celebrate, but first it’s sweat and pain for Carlos, anxious days of waiting for his family. 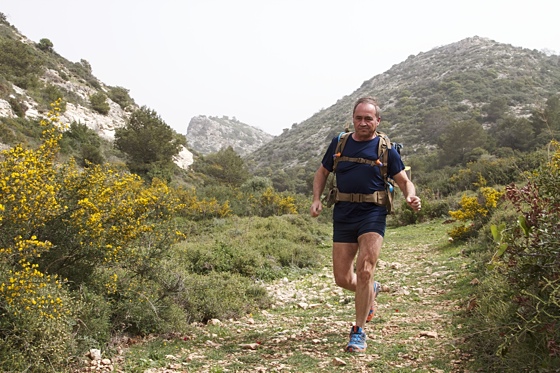 In the 80s Goldberg played major domestic tennis tournaments. Not that tennis is a very ‘social’ sport, but when he discovered the solitude of running, he was hooked. He ran marathons for some years but realized he was not in it to race the others in the field. Ever since, he’s been running alone. He’s not fighting competition, but fighting for every single nearly impossible next step. “It was 66 victories in a row,” he says about his 66 days Appalachian Trail adventure.

He runs without a support team. Nobody’s waiting for him at the end of the day. He has no pre-set milestones. For his INT Run he’s planning to stay on trail for the full distance, not changing clothes – and not showering, as he confirms. He’s carrying a SOURCE Double D Pack with minimal equipment: A mat for the short nights and daytime-naps. A sleeping bag with a cover. One extra shirt. One extra pair of tights. A little stove to heat up instant-food he’s carrying. Some gels to fuel up on energy. Two SOURCE Durabag Hydration Systems for water-supply. He’s packing one pair of extra socks. “But for the last days,” he says, “I can’t change socks, because the fabric gets stuck in my open wounds.” Running a minimum of 16 hours a day – “on trail I’m either sleeping or moving” – he saves himself every gram of extra weight. Still, the pack will be around 13 kg. 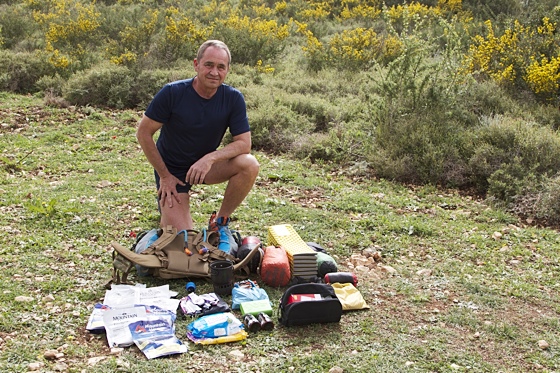 The biggest pouch in his pack holds his medical supply. As a trained paramedic he’s his own nurse, pharmacist and surgeon on the trail. The shoes he’s wearing are 2 sizes too big to accommodate the swellings and bandages he’ll need during his 15 day run. Constant bleeding and nails falling off are just some of the details he provides. “I’m not showing my feet to anybody,” he says.

Why he does it? Carlos is not the type to come forward with anything mystical or sprititual: “Others collect stamps. Everybody has something. For me it’s running. To excel at this.” During the long talk we have with him, the only time he says “I’m worried” is when he talks about his sons insisting to come and meet him in the desert with their Jeep. He’s worried his sons will get lost or something.

He calls the INT a “hostile” trail after talking about rattlesnakes, hallucinations and a drop off a 10 meter boulder on his Appalachian Trail adventure. He definitely kept a sense of respect. The last weeks before the start he has been exercising 8, 9 days without a day of rest, 20 to 25 km a day, the heavy pack on his back – on the treadmill in his gym. He hasn’t run without his pack for months. “It’s all about getting the body used to the load”, he says. 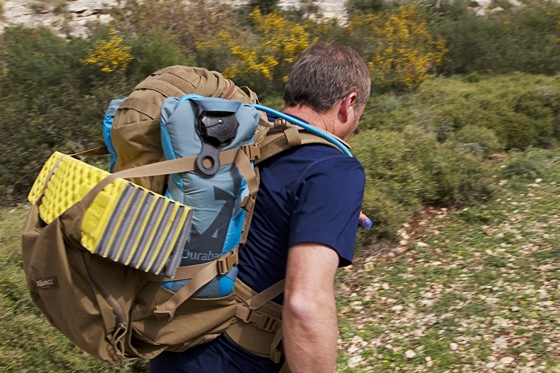 He runs without a watch and without a GPS to show him the way. His approach is in many ways different from Richard Bowles’ INT Run that we supported and covered here exactly a year ago. The Australian based Adventure Runner Richard Bowles did take Carlos’ 12 days record as a benchmark – but he approached the trail South To North, just like Carlos now. “It’s much harder to run south to north,” Carlos says. He is not after his own North-to-South record time of 12 days. His goal this time: to do it in 15 days. And he has this deadline: His 60th birthday party at home.

We’ll cover his run from March 26 here in our SOURCE Outdoor Blog and on our Facebook Page.