Here’s Austria’s 4x leader Hannes Slavik talking about the first weeks of the season fighting uphill battles as a rookie in Enduro.

“The last 15 years my training focused on making my legs fast and powerful. Squats and sprints – for 15 years it was all about that one minute head to head racing action, and believe me, that doesn’t mean I don’t have good cardio.

Then I arrived at Terlago Italy and after my first training session I realised that Enduro racing is way different from what I had expected it to be. I knew that riding 1500 metres of altitude gain won’t be fun, but I just didn’t think that there will be SO MANY uphill’s during the stages. My Ghost Cagua enduro bike worked perfectly and Magrua’s ELECT system saved me some power and time.

Up to stage 1, my Vario Seat post had a technical problem which I couldn’t fix, so I had to put it down before each stage with a screwdriver, what a start into 4 hours of torture.

I felt really fast during the downhill parts, but that was not enough, you couldn’t win this race with leading in these parts only – and man… I lost it all on those many, many short and long uphill sections.

After riding more than one hour up to stage one, there was no power left for those slippery uphills. As I came to stage four we had to actually run the uphills because riding wasn’t possible anymore on the muddy ground…

I gave my best, put in all my power and was able to finish the race. In the end I was on the 78th Place or something like that which didn’t disappoint me though. I did make some mistakes at my first Enduro race and learned from it – also I just burned myself too early on that race weekend.

They canceled stage four because of the bad weather …. YEAH about 350m of altitude gains saved, good for me and my still tired legs 🙂

There was a massive 90 seconds uphill sprint at the start of stage one. That one killed everyone and as I was racing the downhill part of this stage I swear I had double-vision. That was one of the most dangerous and challenging things I have ever done on a bike … At the finish of stage one I was just glad that it was over. I was ok with my speed and I didn’t lose that race on the uphill again.

The other stages went really good. Fast flat pedalling sections, but no more real uphills. The single stages could have been a little bit longer for me and I should have finished stage three a little bit faster… but I really had fun racing those nice slippery trails. Coming to the last stage I felt good and was quite happy with my performance so far.

I made some small mistakes in the upper part – and as if that wasn’t enough, I crashed over my handlebar in the lower section. Those mistakes cost me 15 to 20 seconds and a top 25 place at the end. Finally I finished 33th place.

So: way more cardio will be on my plan for the upcoming season, even when it’s challenging to coordinate it with my 4x practice. I can go fast on that Ghost Enduro bike and there is still much more space to make it better… I am looking forward to collect more experiences in Germany, Samersberg and.

Overall this week was an exhausting but great experience to me. There is just one thing I am a little bit disappointed about… while I was working on stage five in Riva, the top teams shuttled it about six times. Without such a help, which gives you the opportunity to ride all the stages a few times more often than most of the other riders and saving energy at the same time, it’s hard to compete. That is not the Enduro live style I thought I will meet, it is a little bit like dh training for the top teams, and i have to find a way to compete with this.

Back to 4x action

So back to where I actually come from: World Series 4x Pro Tour Poland. After my first Enduro experiences it was time for some 4x action again.

Like in the last few years on this track, I was able to show in the qualification run how fast I can be. For the second time in a row only Tomas Slavik managed to be faster than me and in third position the legendary Michael Prokop was the only one getting in under the 40 seconds limit.

The very first race of the season always brings a little more pressure and excitement. Especially after I broke my collarbone last fall and then my thumb in the winter, I am more than happy about this great start into the new season.

I won my 1/16, 1/8 and 1/4. Then in the semifinal me and Prokop were fighting about the holeshot – which couldn’t have been any tighter but I made it safely into my second World Cup Final.

It was a long day, and it was necessary to pull all my power together in the final. My gate was fine but not perfect and therefore I had to find my position behind the two world champions Slavik and Prokop. This third place I held to the finish line without any problems, made it to the podium and improved my fourth position from Fort William with it.” 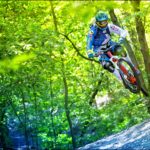 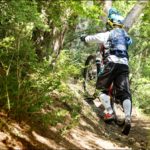 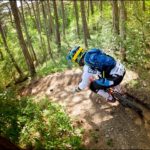 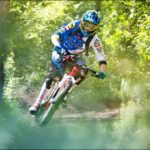 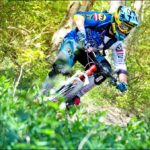 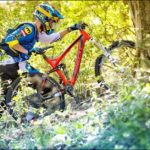 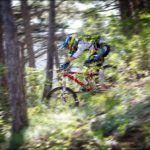 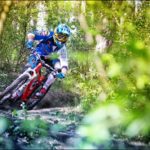