Ultrarunner, running-coach and team-leader Roman Spivak worked with our developers through months of testing, using the Hipster Hydration Belt in training sessions and ultra races, improving the product until it reached the ideal performance he was looking for…

Roman Spivak: “As a part of my collaboration with SOURCE, I started using and experimenting with early versions of the Hipster in summer 2014, in one of the most challenging 50 mile races of the Dolomite Mountains: the Trans D’Havet. The first prototype belt held most of the mandatory equipment required for the race, but felt too bulky and uncomfortable when fully loaded – so eventually I used my old vest (which ended its life in this rough race).

“Using the latest generation of the belt to compete at the Zugspitz-Ultratrail was a real treat. The belt’s advantages helped me achieve the best run of my life: 13:38 hours for almost 100k in a muddy technical terrain.” 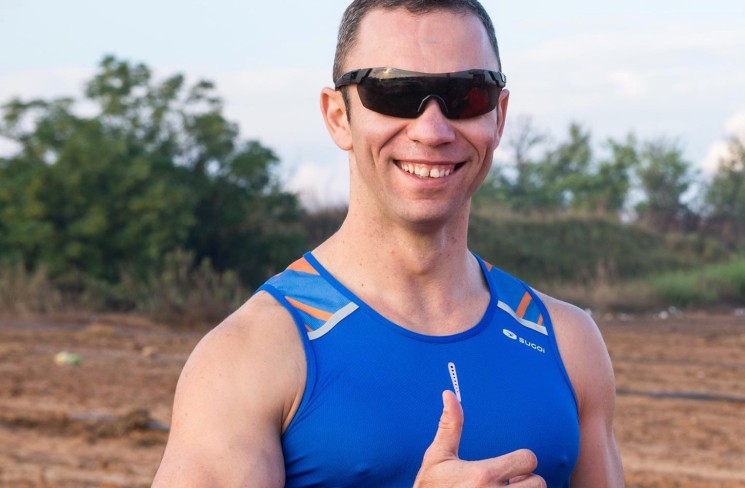 The next generation, improved prototype was slightly wider and featured more flexibility and adjustability around the waist area. I used two belts in October 2014, challenging the national 100 mile record at the Sovev Ha Emek race. The absence of any wobbling of water, and the bladder resting on the waist line close to my center of gravity, contributed to my focus in the race and reduced my fatigue carrying hydration greatly.

According to my race strategy I was drinking every 15-20 minutes, using the bladder for isotonic water and taking the plain water from the aid stations. With this type of setting the reservoir was good for a full lap (32k) in the evening and 20k in the mid day sun.

Improving The Prototype: Advantages Of The Hipster

The main advantages of competing with the Hipster in that race were the ability to use only 2 aid stations for water, relying on the Hipster for the rest, and not feeling over heated or tired, because I had no weight on my shoulders and because i had a lower overall center of gravity.

The access to all the pockets is intuitive and easy and the replacement of the reservoirs takes seconds. I managed to improve the record to 19:19 hours.

One last problem showed though in this extreme race: With the reservoir full, that prototype belt was losing it’s perfect wraparound form and caused nasty chafing to my lower back. Shortly after the race a solution to that problem was offered: the Hipster‘s now standard removable harness.

The lower center of gravity makes it ideal for running in technical terrain and having your back vest-free is a blessing in hot and humid conditions.

The new generation belts featured also more extra pockets and compartments, which is a blessing for an ultra athlete. After multiple tests with the harness and without it, and even though I achieved a 2nd overall finish at Katzrin 82k ultra race, I had my mind set on using the belt without the harness. It just didn’t feel comfortable enough. To work out the chafing problem was a matter of making the materials slightly softer and the belt itself a bit taller, so it would easily accommodate the full 1.5l reservoir.

Using the latest generation of the belt to compete at the Zugspitz-Ultratrail was a real treat. That same event got the best of me in 2013 and I barely finished it. For the 2015 event I was equipped with two belts, one of them would wait for me in the drop-bag area at the 55th kilometer point.

The SOURCE Development Team also managed to develop simple yet genius straps to hold walking poles firmly attached to the belt, allowing the athlete to release them or store them in a matter of seconds.

The materials SOURCE are using for their equipment are raceproof, making it an equipment you use for years of running and hiking.

Using the belt’s advantages with a massive improvement on my downhill technique gave me the best run of my life to this date: 13:38 hours for almost 100k in a muddy technical terrain.

For the years to come, I will use the Hipster Hydration Belt for any trails or races or surges of a race that’s between 30 and 50k, or between 3-6 hours on your feet. Longer than that would be tricky as it is still a belt and there is only so much equipment it can handle, though it does handle double and more than other belts in the market.

The Hipster lowers your center of gravity, which makes it ideal for running in technical terrain. Having your back vest-free is obviously a blessing, especially in hot and humid conditions.

Besides all those features, the materials SOURCE are using for their equipment are raceproof, making it an equipment you use for years of running and hiking. I am proud to take part in developing such a product.”